ESPN’s “Who’s Now” feature has got to be the most ridiculous thing to come out of that network in recent memory ... and they’re are milking it for everything it’s worth, squeezing a full week’s programming out of the most asinine of debates. I can’t believe this actually passes for sports programming right now. They actually have a panel of ESPN anchors, celebrities, and sports “has beens” discussing the merits of what actually constitutes “nowness” for a bracketed plethora of current sports icons. Can they possibly evaluate an athlete on a characteristic that is more vague? It’s ludicrous! Who Cares! Do I really have an interest in what Keyshawn Johnson thinks makes Michael Phelps qualify for Mr. Popular in the category of Nowness? This is like having a contest to find out which color of paint dries fastest … and these guys are serious! I can’t wait for football season to begin so it can usher in a renewed dedication to relevant sports programming. The program director that came up with this brain-fart needs to have his head examined.
Posted by Questfor31 at 3:07 PM No comments: 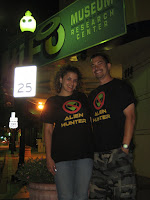 The 2007 UFO Festival in Roswell, New Mexico was an excellent way to spend my vacation this summer. The city of Roswell was everything I expected it would be. Shops with alien themed merchandise lined Main Street, the local McDonald’s was shaped like a giant flying saucer, and even the street lights had little alien eyes painted on each one. We kicked off our first day with breakfast at the Cover-Up Café, a weather balloon tracking, 1940’s military themed, restaurant that was built in a converted Denny’s. The seats and walls were olive drab and the wait staff dressed in fatigues as guests watched giant flat screen monitors tracking imaginary weather balloons. The food was fair, the service was poor, but the atmosphere was interesting. As a fan of the Roswell television series, I expected a Crash Down Cafe and UFO Museum to round out my Roswell tour. A Crash Down Cafe, the Cover-Up is not, but there is indeed a UFO Museum on Main street. It ws not as elaborate as the one on the TV show, but it had its technical merits. World renowned UF-ologists, B-list celebrities, a costume contest, and a parade rounded out the week of convention activities. We spent the rest of our time indulging in conspiracy theories and Mojito’s that we carried around town in alien shaped bottles from Wal-Mart. Definitely a must on the list of any SciFi enthusiast.
Posted by Questfor31 at 2:49 PM No comments:

I've always wanted to go to Roswell, NM. When I found out that they hold a UFO festival in the city of Roswell every year, I had to make the trip. A road trip would also be a great way to get some additional stadium visits in and the "Road Trip to Roswell" was born. My girlfriend Crystal was onboard for the week and half long journey and on June 29 at 11:00pm we were off. The plan was to visit NFL football stadiums in St. Louis, Phoenix, Houston, Dallas, and Kansas City as a sidebar to main event ... the UFO Festival commemorating the 60th anniversary of the UFO crash of 1947. But we were going to do it right! We arranged to have coordinated costumes, to sticker my Ford Explorer with "Alien Hunter" badging, and to take part in one of the finest gatherings of extra terrestrial minds in the continental US.
We started by driving through Indiana and Missouri ... stopped at the Edward Jones Dome in St. Louis and took the mandatory pictures at the arch. From there it was Oklahoma City and a quick stop through the National Monument commemorating the victims of the bombing in 1995. A long drive through the night got us to the Four Corners monument the next morning. The Four Corners monument is located where the states of Utah, Colorado, Arizona, and New Mexico come together at a single point. We then drove to the Grand Canyon to see one of the natural wonders of the world.