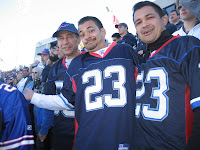 I've been saying this for years, and it didn't occur to me until after I started visiting other stadiums, but I would certainly have to agree with the contention of the Wall Street Journal, that Buffalo Bills fans are quite possibly the worst behaved fans in the NFL. As you know I've been traveling to NFL stadiums across the nation in an attempt to see a game in each one. So far I've been to 22 different NFL venues including the notoriously roudy; Cleveland, Pittsburgh, Oakland, Philadelphia, and New England. So if there's an individual that's uniquely qualified to make this assessment it's me. Well, based on my experience around the league, with the exception of the Oakland Raiders fans (who are excessively verbally abusive to any visiting fan - see my review), Buffalo Bills fans unfortunately deserve this moniker.

It's actually quite shocking. As a western New York native, I grew up in the blue collar, family friendly Buffalo area. Buffalonians are always the first to lend a helping hand and greet you with a smile. Bills tailgaters are a very welcoming breed, offering food, beer, and conversation to any stranger that stops by. It was my love of Buffalo Bills football that inspired my journey to understand the NFL fan experience across the nation, but unfortunately as soon as Bills fans enter the gates of "The Ralph", it's like a switch flips and this sleepy community that prides itself on small town values, turns into a pack of dregs and miscreants, causing all types of problems that are largely ignored by Ralph Wilson Stadium security.

The men in my family go back to Buffalo for one game a year. We sit in different areas of the stadium each time, we wear Buffalo Bills gear, and we're there to watch the game, but every year, someone in the crowd directly ruins our fan experience. And I'm talking about Bills fans who attack other Bills fans (that's unimaginable). We've had beer dumped on us, several times, and been harrassed by belligerant drunks who want to fight for no reason whatsoever. The way I figure it, if I'm encountering these types of problems each year, during the one game I attend at Ralph Wilson stadium, I can only imagine what goes on at the stadium each and every week. My sincere hope is that the decision makers at One Bills Drive take this situation to heart and make changes for the better. Believe me, I'm not one to oppose a drunken good time, in fact, it's my matra, but there has to be a little personal pride involved when the City of Buffalo is lumped in with the worst fans in the National Football League. When you can't take your kids to a Bills game because you're concerned they might be phyically injured by the actions of the uncontrollable, there exists a problem that needs to be addressed.
Posted by Questfor31 at 12:09 PM 2 comments: