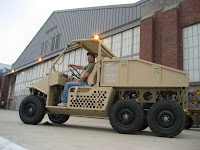 So in an effort to keep you all up to date on Operation: Shameless Marketing, I felt it my duty to report some new found links back to the site. I was recently contact by Buffalo TV sports personality, John Murphy. Hopefully something comes of that and apparently I made it onto http://www.thebiglead.com/, a great sports blog that found it in their heart of hearts to throw some link love my way ... which I greatly appreciate. You can check it out here. It's quick and to the point, but what do i care, I'm drownin' out here suffering from very little media attention, so thanks much for the link.

I also noticed that my boy Nicholas from Pittsburgh Sports and Mini Ponies (http://www.psamp.com/ or PEE-samp for you laypeoples) posted a great little news brief on the Quest. I was actually vey impressed with the link. For those of you that have yet to check out Nicholas's stuff, whether you're a fan of the Steelers or not, it's a good read (the mini ponies and surprisingly very cool as well). Steeler fans seem happy to welcome newcomers onboard their already crowded band wagon (I actually received an invitation myself that I will have to politely decline ... until I go back to Heinz Field, that is). Lord knows they've had lots to celebrate in the last few months, so God bless 'em. I'm still holding out hope that the recent return to the no-huddle offense in Buffalo will usher in a new golden age in Western New York Football (hey one can dream ... it's the curse of the ever-optimistic Bills fan inside me). Anyway, check out the Quest link here and Nicholas, thanks much for posting it. I'll keep readin'.

One final, very impressive link I found was located on a Guy Fieri fan blog called http://www.guyfieri.blogspot.com/. Apparently they somehow located my recent review from the Bills preseason game where I was on the set of Guy Fieri's new television pilot called "Tailgate Warriors". I was quoted and linked to, as a source of platinum blonde, spikey hair-ed information. I also noticed there was great photo of the judges table at the end of the show that has my "Quest for 31" flag waving in the background. That was a unique thrill. Guy was really cool by the way, very professional, and I can't wait to see his show when it airs on the Food Network. Anyway, the post can be found here.
Posted by Questfor31 at 8:41 PM No comments: 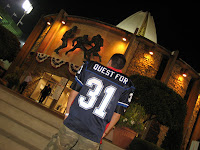 Well, August is over and NFL regular season football is just around the corner. I love this time of year ... so full of promise ... so ripe with opportunity. Each team sits at an even 0-0 record and at this point we're all contenders for the next Super Bowl (in theory).

Anyway, in an effort to capitalize on the lull of "real" NFL activity that is the NFL preseason, I've decided to reach out and see if there's any interest in my Quest for 31 among the mainstream media or any media for that matter. I stand a mere five facilities away from achieving my goal of attending a game in all 31 Stadiums in the National Football League and only seven NFL pro venues separate me from attending a game in all 31 "currently active" NFL stadiums. So in an effort to hit the currently active, I felt it ws my duty to toss in another visit to the monstrosity that is Cowboys Stadium (poor me) and then Lucas Oil Stadium as well (since my last visit to Indianapolis was at the RCA Dome). By the end of the 2009 season, just four years into my journey, it will be complete. 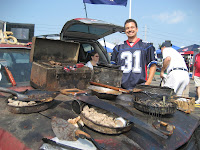 I've spent the last several weeks writing to anyone who might help push my personal crusade into the national spotlight(new media, sports writers, Regis Philbin); and I'm sorry to report that I've had very few takers. It's like you're fishing. The line's out there, the bobber's floating on the surface of the lake, but nothing wants to pull it under. So you wait patiently for something to percolate to the surface.
Well, I've recently had my first signs of life on Operation: Shameless Marketing, as I did receive a lifeline or two from some very prestigious sources in the last couple days and I wanted to extend my special thanks to those who support me as I Quest for 31. To my man Keither, my fellow half-Asian blogger, and the brains behind http://www.bagofnothing.com/, a very heady blog that continuously keeps me entertained with his musing on the day to day, I say thanks for the post. And to the PackerRanter himself, Mr. Robert Greenfield, an extra special thanks for his "Man on a Mission" post over at http://www.packerranter.com/. Hopefully this is a sign of things to come. We'll see. In the meantime, I will continue to prepare for my journey which will begin at Giants Stadium on September 20, 2009.
Posted by Questfor31 at 7:53 PM 1 comment: