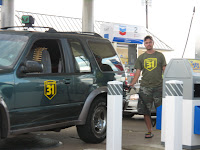 Okay, this weekend was supposed to be another fantastic doubleheader football weekend to rival last weekend's bay area blitzkrieg. Well that was all before Hurricane Ike flattened Galveston on it's way to Houston, inconveniencing the thousands of people caught in the storm's path of destruction through central Texas. The hurricane unfotuantely prompted the Houston Texans to move thier matchup with the Baltimore Ravens on Sunday to be postponed until Week 10 of the NFL regular Season, so unfortunately my doubleheader weekend would not materialize. At least I still had Philly at Dallas matchup in Texas Stadium on Monday Night! 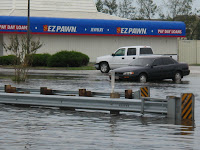 Anyway, Crystal and I hopped into the Questmobile on Friday evening, heading toward what would become a national disater area by Sunday morning. The way I figured it, as long as we stayed east of the storm moving south, we could avoid Ike and its associated terrential rains. By the time we were in New Orleans, Ike would be well past Houston, allowing us to then move west toward Houston, theoretically missing Ike's wrath altogether. We planned to stay with my cousin in Houston on Saturday evening, then move north to Dallas on Sunday to be in town for Monday Night Football. In theory a fairly solid plan, however I neglected to rationalize some of the more ancillary concerns, like food, flooded exits, and the availability of gasoline once we entered the flood zone. So oblivious to these minor concerns we headed south, driving through the night to hit New Orleans for an early dinner on Saturday. After taking some pics at the Louisiana Superdome and grabbing an amazing meal at Copeland's Cheesecake Bistro on St. Charles Avenue, we hit the road bound for Houston. There were power outages all over the city, so I tried to book us a hotel room outside of Houston, which didn't work out at all. Filling up as much as possible on the way into the city, we reached my cousin's house at clsoe to 11:00pm with just over a 1/2 tank of gas. Downed power lines, tree limbs, and road signs were all over the city. Freeway exits were washed out and Walmart parking lots looked like massive lakes with stranded motor vehicles marooned at their centers. There were reports of looting and the typical natural disater surge in criminal activity, but for the most part, the citizens of Houston were just trying to beat the unbearable sweltering heat and recover from any water damage the hurricane may have caused. We were lucky to have made it and even luckier than my cousin actually had power.

The next morning I booked us a hotel in Dallas and we decided to try our luck heading north to find gas. It took a full two hours and most of our tank of gas to find a station that was open and willing to sell us gas. But once we filled up, the A/C came back on and we were well on our way to Dallas for Monday Night Football, appreciative of what we had and concerned for those that lost everything in the aftermath of the storm.
Posted by Questfor31 at 3:24 PM No comments:

Perched on the eve of the 2008 NFL regular season, I am thrilled by the prospect of continuing my personal journey as I Quest for 31. Visiting seveteen stadiums in the last two years has only heightened my interest in the National Football League and its fanbase all around the country. My offseason was spent revamping the website to offer my users the most complete NFL gameday resource available on the world wide web. To that end, I offer an NFL ticket finder section to allow myself and others to find cheap NFL tickets, I've spent some time researching the best online betting sites and offer live NFL betting lines for your convenience, and I've added an NFL Schedule (broken down by team and by week) and an NFL City Road Mileage chart (broken down by hours and miles) that is second to none. If you're looking to attend an NFL football game at any time in the near future, my hope is that my website will facilitate your preparations for a premiere NFL experience.

This year I'm primed to attack the NFL schedule in style. I've setup two double-header NFL weekends for weeks one and two as I'll be traveling to the bay area for the San Francisco 49ers on Sunday and Oakland Raiders on Monday Night Football. Week two is the culmination of my State of Texas experience as I've made preparations to road trip down to Houston for a Texans game on Sunday and the Dallas Cowboys on Monday night. My goal is to hit nine stadiums this year, leaving "The Final Five" for next year to complete my Quest. Agressive but doable ... especially when several friends, who've had to turn down my first few trips of the year, have been working feverishly to join me on a Quest-run for another game instead. So please feel free to contact me with local hotspots and can't miss local flavors from your area, and if you see me in your city, "Buy me a Beer, damn it!"
Posted by Questfor31 at 9:13 AM 2 comments: