One of my lesser known hobbies that I take on over the course of the NFL offseason is taking NFL stadium tours. Few people realize it, but most NFL stadiums offer a guided stadium tour that is usually priced fairly reasonably ($5-$11 per person). I found out about the stadium tour before the 2007 NFL season on a trip to Minneapolis, Minnesota and I was hooked. Stadium tours generally cover the suite and luxury box levels, visting team locker room, the press box, and the field. In some cases stadium tour participants are allowed down on the field to see what things look like from the player perspective and in rare occasions into the home team's locker room (that's always very cool). If you're an ardent NFL fan, taking a stadium tour of your favorite team stadium should be high on your list of priorities. To date, I've been on 14 NFL stadium tours and 3 NBA arena tours. I expect that that puts me in a fairly select group of individuals. Last year, I even consulted on a couple of tours based on what I had already seen in other NFL cities. that was kinda cool.

Anyway, during a recent trip down south, I decided to set up a couple of tours. Driving down Interstate 75, I stopped in at Lucas Oil Stadium, the state of the art home of the Indianapolis Colts. I'm pleased to report that Lucas Oil Stadium has a very impressive stadium tour. The facility itself is immaculate. A red brick exterior with retractable roof and some great site lines allow the home of the Colts to effectively compliment some of the great tailgating that goes on outside the stadium. I did get a change to run the field at Lucas Oil Stadium and found my way into the Indianapolis Colts Locker room as well . For a full report, you can check out my Stadium Tour review.
While in Charlotte, North Carolina I setup an inpromptu tour of Bank of America Stadium, home to the Carolina Panthers. Stopping by on a Monday morning, some fine folks from the ticket office staff agreed to show me around the stadium. The tour began with a look at the field level, then into the Club 87 Suite and through the visitor team locker room. It's a solid tour. 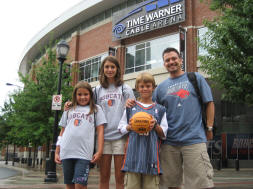 Later that day I took a tour of Time Warner Cable Arena, home to the Michael Jordan-led Charlotte Bobcats. Time Warner Cable Arena was an equally impressive sports venue with an amazing array of suite level box seats and the first indoor tailgating area in the NBA. The Rock the Rooftop tailgating area comes complete with live band entertainment and tabletop seating areas for the adults, while kids will find xBox gaming stations and a practice court for shooting hoops.

I rounded out my southern roadtrip with another trip to the Pro Football Hall of Fame in Canton, Ohio. I simply can't get enough of the Hall of Fame. I find myself visiting it at least once a year.
Posted by Questfor31 at 6:05 PM No comments:

The NFL Offseason ... Ripe with Activity

Wow, what a year. Last year I completed my Quest for 31 with a trip down to New Orleans and the Louisiana Superdome for my regular season finale on Bourbon Street. It was supposed to be my last game of the year, but as the Super Bowl drew near, I received an offer I couldn't refuse. The fine folks at TicketCity.com offered me a ticket to the greatest sporting event in the world ... Super Bowl XLIV. I accepted immediately. Being at the Super Bowl was an amazingly surreal experience. I remember sitting there watching the game in amazement as I knew I was one of the chosen few on hand to witness the crowning of a World Champion in the greatest sport on earth in person. It doesn't get much better than that. 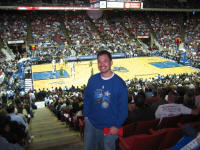 Fast-forwarding a few months, my offseason has been an extrmemly busy one, ripe with lots of new opportunities. Apart from trying to put some additional time into NFLFootballStadiums.com, my attention has been divided amoung several other website ventures. Upon completion of the Quest, everyone's first question always seems to be, "What will my next challenge be?". Well, I love the game of football and I thoroughly enjoy being a part of the tailgating culture that has evolved in each of these disparate cities across the nation. I just can't give that up (besides the Quest Machine is just getting broken in - I put 37,000 miles on it last year), so going forward I'm still planning on attending some NFL games, just not 17. For an encore on my travel exploits, I'd like to begin working my way through the NBA and the NHL. Back in May I started NBABasketballArenas.com to chronicle the exploits of my "RoundBall RoadTrip". So look for me in your NBA arena.

Fantasy Football season is once again upon us, so I've turned to my annual pursuit of steering perfect strangers toward their first fantasy football championships. Working with Jermain Baker, another astute mind and multi-year veteran of fantasy sports, we are taking our talents (thank you, LeBron) to FantasyFootballManifesto.com. There you'll find a series of articles outlining proven strategies for fantasy success, but the heart of what we're offering is a cheat sheet subscription. The cheat sheet on FantasyFootballManifesto is regularly updated and sent directly to your inbox each time there is player movement, injuries, or standout performances that affect player rankings. Think about it, would you rather use a fantasy football magazine that was printed back in June or would you rather have a dynamically updated cheat sheet based on recent developments in the NFL.
We can be your war room staff.
Posted by Questfor31 at 6:03 PM No comments: