Super Bowl XLIV in Miami is rapidly approaching, and I'm doing my best to stay on top of all the developments in South Florida relating to the gameday weekend activities. I've secured my Super Bowl Ticket through TicketCity.com, reserved a room overlooking Miami Beach, got the flights and rental car taken care of, I even bought the Official Super Bowl XLIV jersey (ridiculous, I know). This is the biggest weekend of the NFL Calendar year and I want to make sure I am a part all peripheral party destinations, within reason. So the NFL Experience has been canceled, the Playboy Party has been canceled, Super Gate III with Jay the Tailgate Guy has been canceled ... all of which make for a nebulous mass of misinformation as to what to do down there. To top it all off, NFL regulations strictly prohibit any gameday tailgating on the grounds and surrounding area at Sun Life Stadium. They even have an ordinance against loitering in the parking lot in gameday. So how does one sift through the vast amounts of web data touting the best of the best pregame celebratory bashes? Well, I've decided to post a page on my website describing the who, what, and where of pregame celebrations.

Each year the Super Bowl site is mobbed by fans of the Super Bowl participants, or in this case New Orleans Saints fans and Indianapolis Colts fans. So where are they all planning to gather? Who's coordinating Colts or Saints pregame tailgating? Well, that's what I aim to figure out. I've been in contact with fan tailgating organizations in Indy and NOLA and restaurants and bars down in Miami to figure out where the best Super Bowl Parties are at. If you're interested in figuring out what to do down in Miami over Super Bowl Weekend, check out my Guide to Miami Super Bowl Tailgating on Questfor31.com.

If you have information for me to post on my site either fill in the Comment Frm at the bottom of the page, or send me an e-mail. I'll post addresses, directions, cover charges. Everything you need to know about the Super Bowl XLIV pregame festivities down in Miami. You might also check out the Super Bowl XLIV Visitor's Guide, that I've also posted on the site. It a great source for league sponsored activities.
Posted by Questfor31 at 1:14 PM No comments:

I recently received an incredible offer from "the fine folks at TicketCity". After promoting their online services over the last three years, writing stadium reviews for inclusion on their website, and sending them video from my many adventures around the league, they've actually offered to provide me with a ticket to Super Bowl XLIV in Miami! A ticket to the elusive NFL Championship game ... it's like the Quester's Holy Grail. I mean actually getting your hands on a ticket to the big dance is unheard of, unless you're one of the privileged few that can afford such a luxury. I'll tell you this much, that sucker is going to get bronzed, encased in a titanium ticket holder, and frozen in carbonite! I can't believe I'm finally going to the Super Bowl!

In the early Nineties during the Buffalo Bills reign of terror over the American Football Conference, I dreamed of going to the Super Bowl, but as it became more and more of a commercial entity, the likelihood of my actually attending a grew less and less feasible. In recent years, I grew more and more comfortable with the fact that attending football's greatest game is something that would probably never happen. For TicketCity to come forward and offer me a chance to be a part of an NFL Championship game is a great honor that I do not take lightly. It's certainly a most fitting way to close out the 2009 Season of Questing for 31. Words cannot express how greatful I am for this opportunity. I've just setup a page on my site to provide details to this year's Super Bowl Tailgating in Miami, click HERE for more information.
Posted by Questfor31 at 8:34 PM 1 comment:

Completing the Quest ... but what's Next? 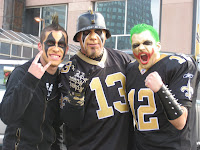 Wow! It's been a while since I had time to add to this blog and lots of things have been going on with my Quest for 31 over the past several weeks. I ended the season in December, two days after Christmas, at the Louisiana Superdome in New Orleans. Donning a Marques Colston jersey with shoulder pads and spiked-studded arm guards, I reconfigured my JokeRaider costume from Oakland to include metallic gold facepaint, thereby transforming me into the Who Dat JOker. The lime green hair garnered lots of attention and I was able to capitalize on some local media as well while in town. The Times-Picayune in New Orleans and Star Tribune in Minneapolis did features on my Quest and three of the local affiliates down in New Orleans sent camera crews to interview me as I completed my four year journey. It was nice to finally be recognized for this passion of mine that's taken me all around the country in search of thirty-two unique home team experiences. The journey's end is bitter sweet.

I'm constantly asked what my next step or my next challenge will be. With pause, I respond that I think I'll attack the NHL and NBA Arenas next. Maybe, try to see a home game in each of those pro sports venues and write about my experiences as a fan of NBA Basketball and NHL Hockey. It will be at a much less aggressive pace, but it would be incredible to continue to follow in the mighty footsteps of Peter Farrell and Andrew Kulyk who are the ultimate questers, having traveled to every major sports venue in the nation. I'd also like to continue Questing for 31. As new stadiums are built, I gotta be there. As old friends around the league continue to send invitations, I'll be there. There's only one Commissioner of Tailgating and he is an exceptional mentor that's seen and done things I can't hope to achieve, but perhaps I can continue to hold the torch of Questing high, and in my own way, work to contribute to the sense of unity that is NFL tailgating.
Posted by Questfor31 at 7:51 PM No comments: