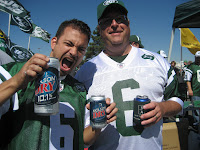 I kicked off the 2009 regular season edition of the Quest for 31 at the Meadowlands in East Rutherford, New Jersey for the New York Jets home opener. I had never been to New York City before, so attempting to decode the bus and train scheduling in order to make it out to the stadium in time for the game proved a unique challenge. As it turns out, although a new rail line has been built which is intended to shuttle football fans to the stadium from the city, this new line begins running at 10:30am. I couldn't beleive they would actually start running football fans to the stadium at 10:30 in the morning. How do they expect anyone to get in a fair amount of tailgating before game time? Trying to park in the lot is not even an option as onsite parking is severely restricted due to the construction of their brand new football stadium opening in 2010. I ended up taking a bus which worked out extremely well and got us into the lot at 8:00am primed and ready for a full day of NYC tailgating.

Linking up with Frank Conway from Jets Tailgate lot 5A and Joe Maino from TailgateJoe.com I was able to absorb the full New York Jets tailgating experience. These seasoned vets guided us through the subtle nuances the full New York Jets home team experience and there was some incredible tailgaitng to take part in at the Meadowlands. The Jets opened up the season with an impressive win over the Newengland Patriots and the New York Jets chant, led by Fireman Ed earned him a gameball for his efforts. Awesome day! Great tailgating! Be sure to check out our video on YouTube.
Posted by Questfor31 at 6:21 PM